Kubrick: The opportunity to see things the way they are. 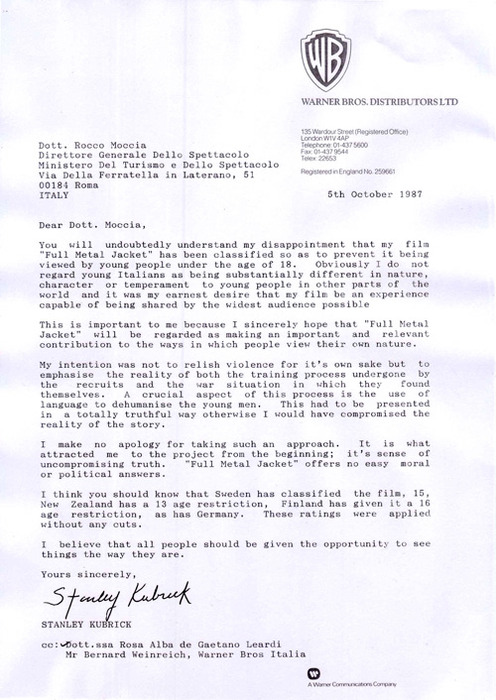 You will undoubtedly understand my disappointment that my film “Full Metal Jacket” has been classified so as to prevent it being viewed by young people under the age of 18. Obviously I do not regard young Italians as being substantially different in nature, character or temperament to young people in other parts of the world and it was my earnest desire that my film be an experience capable of being shared by the widest audience possible.

This is important to me because I sincerely hope that “Full Metal Jacket” will be regarded as making an important and relevant contribution to the ways in which people view their own nature.

My intention was not to relish violence for it’s own sake but to emphasize the reality of both the training process undergone by the recruits and the war situation in which they found themselves. A crucial aspect of this process is the use of language to dehumanise the young men. This had to be presented in a totally truthful way otherwise I would have compromised the reality of the story.

I make no apology for taking such an approach. It is what attracted me to the project from the beginning: it’s sense of uncompromising truth. “Full Metal Jacket” offers no easy moral or political answers.

I think you should know that Sweden has classified the film, 15, New Zealand has a 13 age restriction, Finland has given it a 16 age restriction, as has Germany. These ratings were applied without any cuts.

I believe that all the people should be given the opportunity to see things the way they are.

One thought on “Kubrick: The opportunity to see things the way they are.”