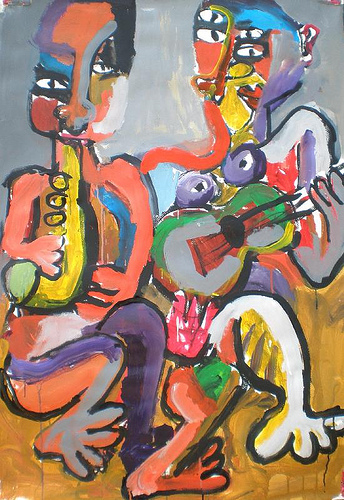 businessmen who are also musicians

businessmen who are also musicians

These pictures were taken starting in 1982, when I was in my early 20’s. Francesco Clemente was the first portrait I took in the series. He became a friend and I also modeled for him. Thomas Ammann, the Swiss art dealer, and Matthias Brunner, his boyfriend, who remains one of my closest friends today (Thomas died of AIDS in 1993), started collecting my portraits. That’s how I got to know Bruno Bischofberger. Bruno came to my studio/apartment one day in 1984, bought 40 photographs and asked to publish a book of my work. That was a great day. He later gave me a show in his Zurich gallery in 1985. Bruno called me up one day and said “Go over to The Factory- I want you to photograph Andy Warhol and Jean-Michel Basquiat for a show I’m doing”. I got to The Factory and Andy decided they should be photographed in Fred Hughes’ office. During the sitting, Jean-Michel proceeded to smoke three gigantic spleefs. I ended up in Basquiat’s studio downtown quite a few times and it’s true that he painted in designer suits. I was at The Factory often and sometimes found myself sitting at Andy’s long table for a last minute lunch with Boy George, Quentin Crisp, and Keith Haring, whoever was current at the moment. It was fun and surreal.

I was nervous about taking a portrait of Robert Mapplethorpe. He was a photographer I very much admired. I shouldn’t have been worried- Robert was extremely sweet and hospitable; he offered me chocolate milk and a joint. I’m sorry I didn’t have a chance to know him better. He died shortly after. The portrait of Rainer Fetting was an assignment for a German art magazine, WolkenKratzer. The interviewer, Fatima Igramhan, hired a model for the shoot. His name was Desmond. Rainer and Desmond fell in love that day and were together for years, Desmond appearing in many of Rainer’s paintings. Keith Haring was photographed in his studio on lower Broadway. Every single inch of his walls was covered with drawings. I really didn’t have to do anything-Keith just went through his poses and I snapped the shutter. I wanted to take a simple portrait of Cindy Sherman. Just outside the frame lay all of the pig noses and assorted props we have seen in her photographs. I love Cindy’s work, especially her early black and white film stills. I photographed William S. Burroughs on his 71st birthday in the loft of one of his good friends, right above the Strand Bookstore on lower Broadway. I didn’t know much about Burroughs except that he had accidentally killed his wife when trying to shoot an apple off her head. So, when the door opened and I saw a long table lined with shotguns, I was a little afraid. I was in and out of the loft within 30 minutes. I couldn’t help noticing that Mr. Burroughs wore Earth Shoes, which had long been out of fashion. Later, I found out that the shotguns were filled with paint for his “Shotgun Paintings”.

After focusing on still life for many years, I have recently started taking more portraits again and am happy to have come back to something I love so much.

Jeannette Montgomery Barron was born in 1956 in Atlanta Georgia and studied at the International Center of Photography in New York. She became known for her portraits of the New York art world in the 1980s, which were later published in Jeannette Montgomery Barron (Edition Bischofberger, Zurich, 1989). Additional publications include Photographs and Poems, a collaboration with Pulitzer Prize winning poet Jorie Graham, Scalo (1998), Mirrors, Holzwarth Editions (2004), and Session with Keith Haring, twenty photographs taken by Montgomery Barron in Haring’s studio one afternoon in 1985. Her works are in numerous public and corporate collections, including The Museum of Fine Arts, Houston, The High Museum of Art, Atlanta, Kunsthaus, Zurich and The Andy Warhol Museum, Pittsburgh. She has shown internationally at Galerie Bruno Bischofberger, Zurich, Scalo, New York and Zurich, Jackson Fine Art, Atlanta, ClampArt, New York and Magazzino D’Arte Moderna, Rome.

Montgomery Barron currently lives in Rome and Connecticut with her husband and their two children where she is completing work on a series entitled My Mothers Clothes, color photographs of her mother’s clothing spanning from the late 1950’s through the 90’s. The project began as a way of communicating and remembering the past with her mother, who had Alzheimer’s disease. She is represented by ClampArt, New York and Magazzino d’Arte Moderna, Rome.
jeannette-montgomery-barron.com | clampart.com