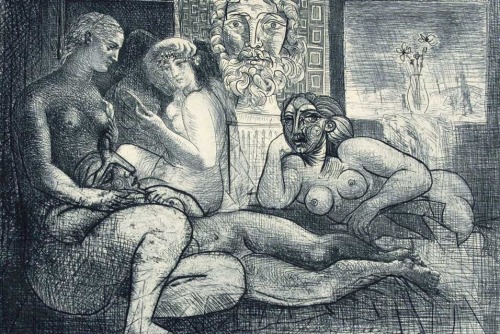 NEW YORK, NY.- “Celebrating the Muse: Women in Picasso’s Prints 1905-1968” opened at Marlborough Gallery and includes over 200 prints by Pablo Picasso in a variety of print-making techniques – etching, drypoint, linocut and lithography – that explore the theme of woman as muse in these media. Marlborough’s exhibition is the first comprehensive overview of this subject as specifically depicted in Picasso’s graphic oeuvre. The show features works spanning his entire career from his first print, Le Repas frugal, 1905, to selections from the tour-de-force of his late period, the Suite 347 of 1968. A notable lender to the Marlborough exhibition is Maya Widmaier Picasso, the artist’s daughter.

Marlborough’s show is timed to coincide with three exhibitions of Picasso’s work at important museums in the United States: Picasso: Themes and Variations at The Museum of Modern Art, March 28-September 6, 2010: Picasso and the Avant-Garde in Paris, Philadelphia Museum of Art, February 24, 2010-April 25, 2010 and Picasso in The Metropolitan Museum of Art, April 27, 2010–August 1, 2010.