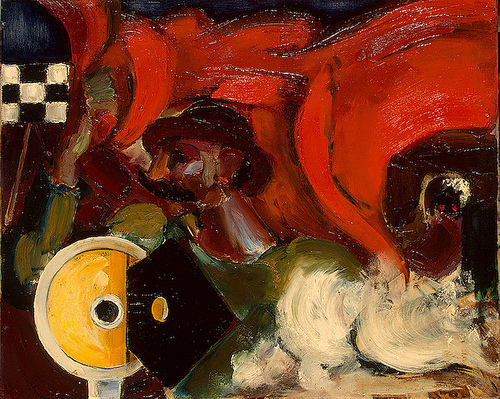 Le Fauconnier was born near Calais, but came to Paris in 1900 to study law. But he soon abandoned legal studies for art, attending the studio of Jean-Paul Laurens for a year, and moving to the Académie Julian a bit later. Around that time he added the “Le” to his name.

In 1905 he exhibited for the first time at the Salon des Indépendants. He was associated with the Fauves for a while, but he was more interested in structure than in color and, along with Braque, Gleizes, and Metzinger, he readily became a cubist around 1909. Then, as an instructor at the Académie de la Palette in 1912, Le Fauconnier helped lead the way to expressionism.

Among his students were Marc Chagall and Liubov Popova. Le Fauconnier was also associated with the Munich based group, the Neue Künstlervereinigung, but resigned from that group, along with other artists, in 1911, in a protest against the rejection of a composition by Kandinsky. When Der blaue Reiter group published their famous Almanac in 1912, with work by Schönberg, Marc, and Kandinsky, Le Fauconnier was also represented.