Reflections of a Poem

Did You Hear What They Said?

Gilbert “Gil” Scott-Heron (April 1, 1949 – May 27, 2011)[4] was an American soul and jazz poet,[2][3] musician, and author known primarily for his work as a spoken word performer in the 1970s and ’80s, and for his collaborative soul works with musician Brian Jackson. His collaborative efforts with Jackson featured a musical fusion of jazz, blues and soul music, as well as lyrical content concerning social and political issues of the time, delivered in both rapping and melismatic vocal styles by Scott-Heron. The music of these albums, most notablyPieces of a Man and Winter in America in the early 1970s, influenced and helped engender later African-American music genres such as hip hop and neo soul.

Scott-Heron’s recording work has received much critical acclaim, especially for one of his most well-known compositions “The Revolution Will Not Be Televised“. His poetic style has been influential upon every generation of hip hop since his popularity began.[5] In addition to being widely considered an influence in today’s music, Scott-Heron remained active until his death, and in 2010 released his first new album in 16 years, entitled I’m New Here.

Ain’t No Such Thing As Superman

Also, be sure to check out Rick’s first collection of poetry, Story the Flowers

‘MAN O WAR’(Natural History Episode 24)In this special installment of our Natural History film series, Geologist soundtracks a macroscopic view of a Portuguese man-o-war’s beautiful, yet highly venomous tentacles. The man-o-war is often mistaken as a jellyfish, but this is not the case. It does not swim, but is instead propelled by the winds, tides and currents across the ocean’s surface. In fact, a man-o-war is not even a single organism, but an entire colony of organisms called siphonophores, that live together as a singular unit. They are found floating across all of the world’s tropical and subtropical oceans. Even more impressive is that the man-o-war colony is comprised of four different types of polyps, called zooids, that each serve a different purpose to the overall functioning of the colony. Film + Aquarium:MORPHOLOGICOriginal Soundtrack:GEOLOGIST of Animal CollectivePremiered at Borscht Film Festival | April 23, 2011 – Miami, FloridaSee bit.ly/​mq41E3 for more details.Twitter: twitter.com/​CoralMorphFacebook: bit.ly/​9zdW2R

morphologicstudios.com
“The brainchild of longtime friends Colin Foord and Jared McKay, MORPHOLOGIC concocts installations that combine sound and light to transform the minute creatures that inhabit our coral reefs into strange, abstract works of surreal art. In the process, they bridge the gap that has long divided science and art. But don’t let appearances fool you; their work also captures a world that speaks volumes about the social interactions in the concrete spaces we create far above the ocean’s surface.”  – Jorge Casuso, Miami New Times
Tagged film, music, video
1 Comment
Uncategorized

by Gina and Scott Keatley

Music:“Mirleft” and “Half A Decade”from the Album “Fox Hill Lane”

Artist Gerry Judah‘s paintings are massively and aggressively three-dimensional, piling up, away, and out from the canvas to form linked cities, ruins, and debris-encrusted bridges, like reefs.

They are perhaps what a tectonic collaboration between Lebbeus Woods and Jackson Pollock might produce: blasted and collapsing landscapes so covered in white it’s as if nuclear winter has set in. 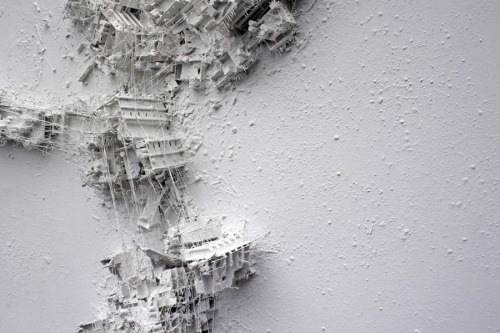 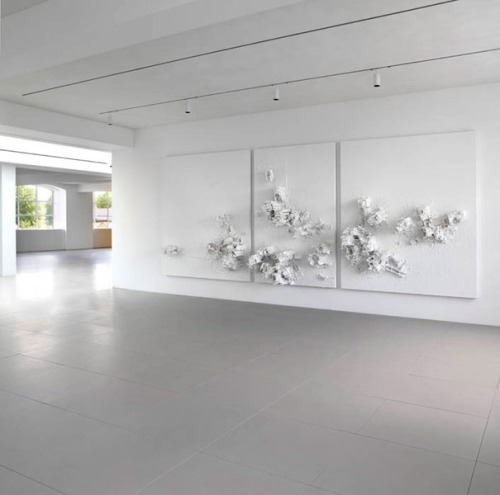 As the short film included below makes clear, Judah embeds entire architectural models in each piece, affixing small constellations of buildings to the canvas before beginning a kind of archaeological onslaught: layering paint on top of paint, raining strata down for days to seal the landscape in place and make it ready for wall-mounting.

Who’s Got the Jazz?