Art on the Moon

In 2003, Craig Kalpakjian proposed a series of Earthworks-style
drawings that would be executed on the surface of the moon, like the
Nazca Lines or 60’s bad boys Michael Heizer and Dennis Oppenheim’s
desert drawings. He called them Moonworks.

Now I find out there was already an entire Moon Museum, with
drawings by six leading contemporary artists of the day: Andy Warhol,
Robert Rauschenberg, David Novros, Forrest “Frosty” Myers, Claes
Oldenburg, and John Chamberlain. The Moon Museum was supposedly
installed on the moon in 1969 as part of the Apollo 12 mission.

I say supposedly, because NASA has no official record of it;
according to Frosty Myers, the artist who initiated the project, the
Moon Museum was secretly installed on a hatch on a leg of the Intrepid
landing module with the help of an unnamed engineer at the Grumman
Corporation after attempts to move the project forward through NASA’s
official channels were unsuccessful.

Myers revealed the exhibition’s existence to the New York Times,
which published the story Nov. 22, 1969, two days after the Apollo 12
crew had left the moon–and the Intrepid–and two days before they arrived back on earth.

According to Myers, who was involved with E.A.T. on the Pepsi Pavilion
project at the time, the six drawings were miniaturized and baked onto
an iridium-plated ceramic wafer measuring just 3/4″ x 1/2″ x 1/40″,
with the assistance of engineers at Bell Labs.

According to the Times, the artworks are, clockwise from the top
center: Rauschenberg’s wavy line; Novros’ black square bisected by thin
white lines [in 1969, Novros also created the incredibly rich, minimalist fresco on the second floor of Judd’s 101 Spring St];
a computer-generated drawing by Myers; a geometric mouse by Oldenburg,
“the subject of a sculpture in his current show at the Museum of Modern
Art” [a sculpture which is in MoMA’s permanent collection, btw]; and a
template pattern by Chamberlain, “similar to one he used to produce
paintings done with automobile lacquer.” Warhol’s contribution, which
is obscured by the thumb above, is described as “a calligraphic
squiggle made up of the initials of his signature.”

Actually, it’s a drawing of a penis. Here are some other photos by
Frosty Myers, published, I believe, with a 1985 Omni Magazine article
by the arts writer Phoebe Hoban. That would be the Warhol Penis there
in the upper right.

As the NASA spokesman told the Times when asked about the Museum
infiltration, “I don’t know about it. If we had been asked, it sounds
like something we’d have very much interested in [sic]. If it is true
that they’ve succeeded in doing it by some clandestine means, I hope that the work represents the best in contemporary American art.”
[emphasis added for ironic amusement, though to Myers’ credit, it
turned out to be a pretty good grouping of artists to have involved.]

But is it conceivable that someone could have smuggled dirty
pictures onto a mission to the moon? Actually, yes. Even if Warhol
hadn’t sent that penis to the moon, Apollo 12 would still have achieved
the first known incident of lunar nudity.

The back-up crew for the A12 mission surreptitiously inserted reduced photos of Playboy centerfolds into the flight crew’s fireproof plastic cuff checklists which were only discovered about 2.5 hours into their first moon walk.

Venus at the Edge 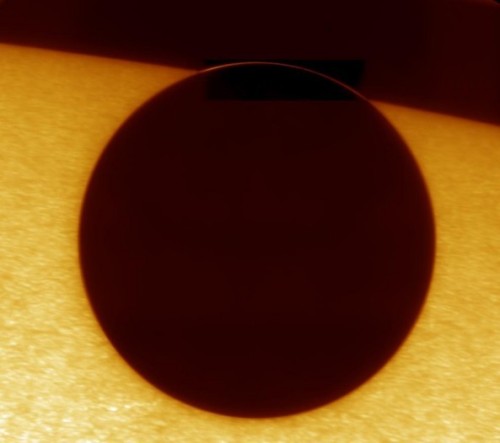 Explanation: With Venus in transit at the Sun’s edge on June 8th, astronomers captured this tantalizing close-up view of the bright solar surface and partially silhouetted disk. Enhanced in the sharp picture, a delicate arc of sunlight refracted through the Venusian atmosphere is also visible outlining the planet’s edge against the blackness of space. The arc is part of a luminous ring or atmospheric aureole, first noted and offered as evidence that Venus did posses an atmosphere following observations of the planet’s 1761 transit. The image was recorded using the 1-meter Swedish Solar Telescope located on La Palma in the Canary Islands. For the Institute for Solar Physics, Dan Kiselman, Goran Scharmer, Kai Langhans, and Peter Dettori were at the telescope, while Mats Lofdahl produced the final image. Excellent movies of the transit – including one of the emergence of Venus’ atmospheric aureole – are available from the Dutch Open Telescope, also observing from La Palma.

This compilation of video shows some of the first imagery and data sent back from NASA’s Solar Dynamics Observatory (SDO). Most of the imagery comes from SDO’s AIA instrument, and different colors are used to represent different temperatures, a common technique for observing solar features. SDO sees the entire disk of the Sun in extremely high spacial and temporal resolution and this allows scientists to zoom in on notable events like flares, waves, and sunspots.