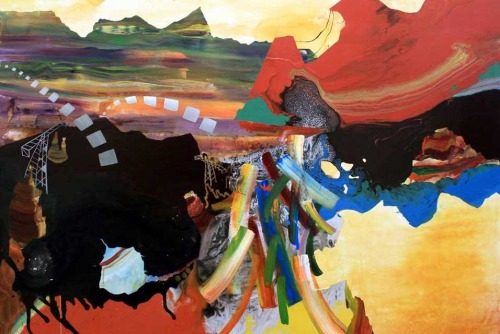 Kenneth Noland has died at the age of 85. The artist’s wife, Paige Rense, told the New York Times that the cause of death was cancer.

Noland was born in Asheville, North Carolina. A veteran of World War II he joined the U.S. Air Force in 1942. After his discharge four years later, Noland took advantage of the G.I. Bill to study art at Black Mountain College in his home state of North Carolina. Noland attended the experimental Black Mountain College and he studied with professor Ilya Bolotowsky who introduced him to Neo-plasticism and the work of Piet Mondrian. There he also studied Bauhaus theory and color with Josef Albers and he became interested in Paul Klee, specifically his sensitivity to color. In 1948 and 1949 he worked with Ossip Zadkine in Paris, and in the early 1950s met Morris Louis in Washington DC. He became friends with Louis, and after seeing Helen Frankenthaler’s new paintings at her studio in New York City in 1953 they adopted her “soak-stain” technique of allowing thinned paint to soak into unprimed canvases. (…)
Read on (via artdaily)
Tagged art
Leave a comment
Uncategorized 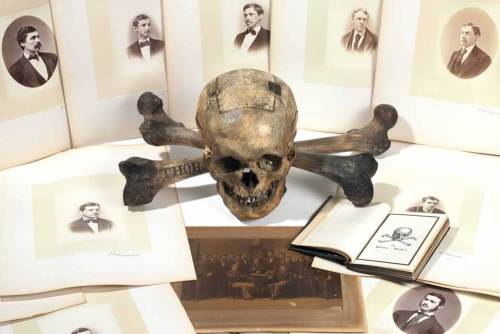 The 1872 ballot box belonging to Yale’s secretive Skull and Bones society that is being offered for sale at Christie’s New York City auction house. The ballot box, in the form of a skull and cross bones, is being sold on Jan. 22 for an estimated $10,000 to $20,000. (AP Photo/Christie’s) NEW YORK, NY (AP).- A human skull that once apparently belonged to Yale’s mysterious Skull and Bones society is being sold at auction.

Christie’s in New York believes the skull was used as a ballot box around 1872. It has a hinge on top and is surrounded by crossbones.

Skull and Bones was founded in 1832. The elite society has closely guarded its members’ names and its activities since the early 1970s. Publicly known members include both presidents Bush. The purchaser also will get a black book with names and photographs of earlier members. The auction is Jan. 22. The presale estimate is $10,000 to $20,000. Fittingly, Christie’s has agreed to keep the seller’s name a secret. It describes the person only as a European art collector.
via artdaily
Tagged art, history, photography, politics
1 Comment
Uncategorized

It feels strange to have written a book which will never be read.

Jill Magid’s artwork being confiscated from Tate Modern Monday, January 4, 2010. (Photo by Amy Dickson) LONDON – It’s not often that the end of an exhibition at

Tate Modern ends with a dramatic twist but that’s exactly what happened today, Monday Jan 4 2010, when two representatives from the Dutch Ministry of Interior took permanent custody of the exhibits on behalf of the Dutch Secret Service who had originally commissioned the artworks.

The show entitled ‘Authority To Remove’ became a showdown between the artist Jill Magid and her commissioners, the AIVD (Dutch Secret Service), who didn’t like what she revealed about their organisation. In fact the show was only allowed to proceed under strict conditions imposed by the AIVD. As part of the exhibition the artist presented a book she had written about the AIVD but was not allowed to reveal its contents. Whole sections of the book were blacked out and it was only allowed to be displayed under glass. Predicting today’s eventual outcome Magid called her show ‘Authority to Remove’ and so in effect made the act of removal a fait accompli and part of the work itself. Magid says “This raises questions about the nature of commissioning. My brief was to “Reveal the face of the organisation”. I felt I did just that. It feels strange to have written a book which will never be read.”
via artdaily
Tagged art, books, politics