In this new body of work Martin continues his exploration of the transformative nature of time and use; the decay as well as revitalization of the urban landscape around his studio, which provides the primary inspiration for his rhythmically constructed abstract paintings. Critic Jonathon Goodman writes: “Martin takes on the vigor and grit of modern city life…the surface is gridlike but roughed up, as if the toughness of urban existence had made its way into the painting.”

A Rhode Island School of Design graduate, Martin has just been honored with the Rhode Island State Council on the Arts Fellowship in Painting. He has twice been awarded Fellowships in Drawing, revealing his heightened awareness of line and form. That skill is evidenced in his set of prints which have been acquired by The Cleveland Museum of Art for their permanent collection.

The artist is influenced by the immediacy of working in the post-industrial environment of his studio, yet his work is also informed by a hybrid of images, from abstractions of architectural forms to, in his words, “the influence of Indian tantric painting and the kinds of logics displayed in those miniature meditative structures.” 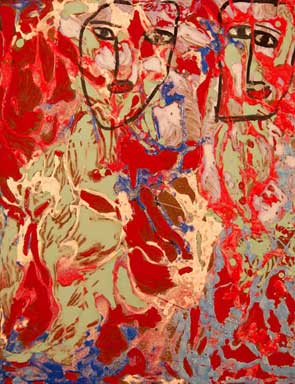 Janet Sobel, Untitled (JS-013), c. 1946.  Oil on masonite, 18 x 14 inches.  Photo courtesy:  Gary Snyder/Project Space
NEW YORK, NY.- Gary Snyder/Project Space is showing a one-person exhibition of drip paintings and works on paper by Janet Sobel (1894 – 1968). She is best known as the self-taught artist whose drip paintings of the early 1940s influenced Jackson Pollock. Her work has been acclaimed both in the “high” art world of Abstract Expressionism and in the “Outsider” or “Folk Art” world of self-taught artists. Sobel was born in 1894 in the Ukraine, emigrated to New York in 1908, and married and raised a family of five children before becoming “one of America’s most talked about surrealist painters” Completely untrained, Sobel first painted in 1937 at the age of 43. She began with figurative images that were painted in a primitive style. By 1943 her work had moved into a spontaneous expressionistic style of abstraction that gained her serious admiration among such art world luminaries as Peggy Guggenheim, the surrealists Max Ernst and Andre Breton, the philosopher and educator John Dewey and critic and collector Sidney Janis. Her first one-person show was at Puma Gallery at 108 West Fifty-Seventh Street in 1944; a short essay about Sobel by John Dewey introduced the checklist. She was in the Women show at Peggy Guggenheim’s Art of This Century gallery in 1945, and in 1946 Guggenheim gave her a one-person show. Clement Greenberg and Jackson Pollock attended the Peggy Guggenheim exhibition in 1946, and most probably the 1944 show at Puma Gallery. Greenberg later recalled that after seeing Sobel’s all-over drip paintings, “Pollock (and I myself ) admired these pictures rather furtively The effect and it was the first really ‘all-over’ one that I had seen, since [Mark] Tobey’s show came months later, was strangely pleasing. Later on, Pollock admitted that these pictures had made an impression on him.”
via artdaily.org
Janet Sobel on Artnet
Tagged art
1 Comment
Uncategorized 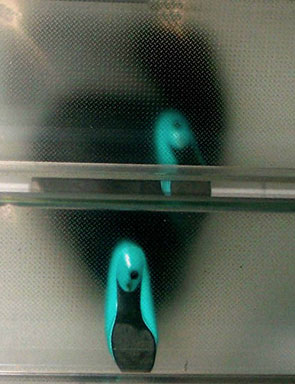 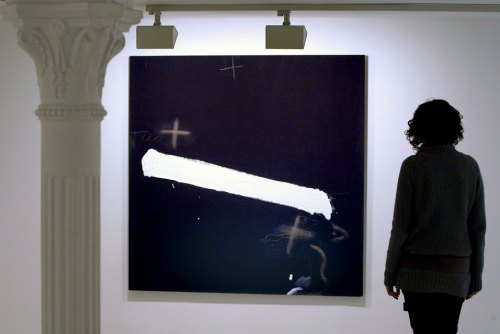 A woman observes one of the works by the painter Antonio Tapies that he is currently exhibiting during his 86th year of life. There are 17 works from his last creation at the Toni Tapies Gallery.
BARCELONA.- Recent works by Antoni Tàpies can be seen at Toni Tàpies Gallery, owned by the son of the Contemporary Spanish artist. This new exhibition gathers 17 new paintings, some of them in large format, but all of which take on the theme that has surrounded the artist since many years ago: symbols and signs. Almost of all of the works have been created during his stay at Campins, at the foot of Montseny. A new element in these recent works is the use of marble powder, which adds substance to the paintings, together with collages and mixed media. At 86, Tàpies said about his Works: “It is the same Tàpies, but more synthesized, more condensed.” Antoni Tàpies is one of the famous artists of European abstract expressionism. After studying law for 3 years, he devoted himself from 1943 onwards only to his painting. He is perhaps the best-known Catalan artist to emerge in the period since the Second World War.
via artdaily.org
Tagged art
Leave a comment
Uncategorized